Well as of Sunday night (the night before we left) we had just 4 kids signed up to go with us for our first ever soccer camp.  I told my group of leaders that we needed to prepare for 15 to 20.  Monday morning surely came, along with 8 new kids.  We headed out to the camp in Tierra Colorada with 12 boys, ages 14-17.  About half of the group was from my youth team and the other half were new kids I had never met. 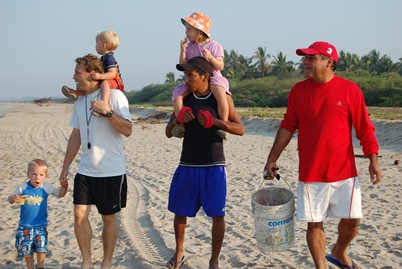 (Ben with Antonio and Piña, two of the coaches)

We had two tournaments going on throughout the three days also.  First was a soccer-volleyball tournament.  We made nets among the coconut trees and we had teams of three guys.  It seemed like the guys really liked this because it was a break from playing on the beach. 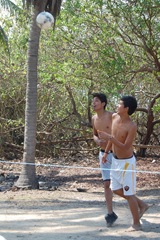 The other tournament was the “Copa Colorada”.  We had 4 teams playing 4 v 4 on the beach, with a semi-final and final on Wednesday morning. 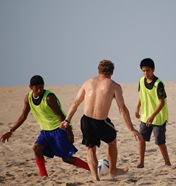 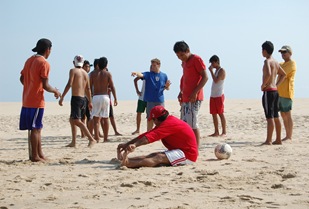 Another highlight was playing some water polo with the guys in the lagoon close by.  The guys as well as coaches really had a blast playing in the water, and it was a good change of pace from the incredible heat of the sand.

Throughout the day, as well as in the evening, we had coaches chats with the boys.  We tried to help reinforce some of the things we had taught them throughout the day.  Each evening we also had a coach share their testimony with the boys.  One of the guys named “Piña”, shared his testimony of how God changed all of his life including his crazy life of soccer and alcohol.  I really hope that the boys saw a great example of a life changed by God.

(Above, playing a little Bulldog in the sand when we first arrived.) 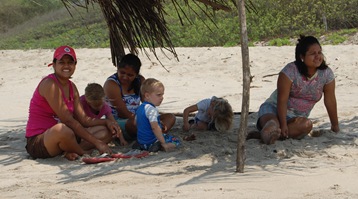 Katie and the kids came as well to help run the little store at the camp.  They sold sodas, gatorades, chips and candy.  They also had a great time playing at the beach and in the lagoon, getting to play with the boys and helping in the kitchen. Juliana came with us to help out.  It was so great to have them there to be a part of the camp. 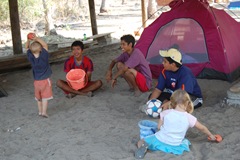 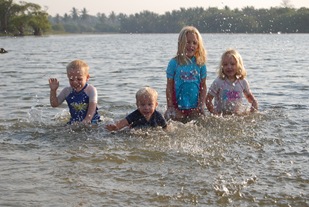 The camp had 2 purposes.  One was to minister to the boys that came to the camp.  I really think we as coaches did a good job just sharing our lives with the boys—living with them and loving them well.  The other purpose was to encourage the coaches that came, and to give them a better understanding of how they can use soccer for ministry.  To live with non-believers and share Christ through your daily testimony.  At first when we left I was discouraged that a few leaders did not come that I thought would.  Now I see how the Lord brought just who he wanted to.  I hope and pray that the leaders—Antonio, Piña, and Omar—were challenged and encouraged to live there lives for Christ, and also in the practical ways  that they can use soccer to influence others for our Lord and Savior.

(Above, this is armadillo, and yes, we ate it for one meal!  Not as bad as I (Katie) expected!)

Thanks for your prayers for this first soccer camp.

We want to stay CONNECTED!

Did you move? Change your email? Are you new to our team? To add or update your contact information, please click HERE. Thank you!

Receive email notifications when we update our blog!